The time has come for ‘Best of 2015’ threads and to reflect on all the wonderful books I enjoyed over the year. This piece will address my top 10 reads published in 2015, but is missing some of the amazing older books I read throughout the year. I read roughly 80 books this year, about half of which (40) were published in 2015, and the following books are my top picks. I found the new releases this year surprisingly less powerful than many sequels. Last year I gave over half the top 10 spots to new releases, whereas this year only three made the cut. It has been a year of very powerful sequels, in particular second installments of series. With that said, let’s talk about some of 2015’s gems and please note that some of the blurbs link to my full reviews of the books. 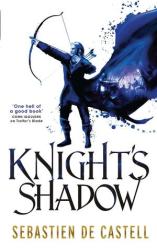 10) Knight’s Shadow by Sebastien De Castell – one of my top five books from 2014 was Traitor’s Blade, the first of the Greatcoat series, for its incredible humor, emotional impact, and great cast. The follow-up, Knight’s Shadow, was a great addition that explored some large growth in the trinity of main characters, while still keeping the same powerful voice and tone from book one. The plot evolved nicely and the general quality of the book stayed consistent with Traitor’s Blade, but there was slightly less emotional impact in the second novel. With two demonstrations of consistent talent I am eagerly awaiting De Castell’s third entry, Saint’s Blood, in 2016. 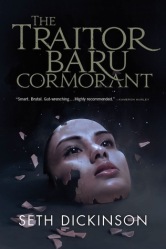 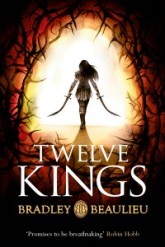 8) Twelve Kings in Sharakhai by Bradley P. Beaulieu – The first of a new epic fantasy based in an Arabian setting. The story follows a girl named Cena, a gladiator in Sharakhai, as she tries to survive in an incredible city ruled by twelve kings in the center of a desert. The book had a very slow start but picked up pace rapidly after the first 20%, continuing all the way to the last page. With Bradley having found his groove I cannot wait to pick up the sequel to see where the story will go. 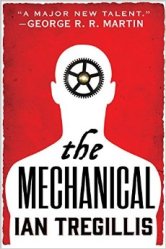 7) The Mechanical by Ian Tregillis – I read a lot of good historical fiction this year, with The Mechanical taking the win by a small margin. With its original setting, steampunk science, and character growth it was a refreshing read that distinguishes it from its competition. The story of The Netherlands and France has had me looking for historical fiction of a wider subject than WWII or England. The sequel, The Rising, releases next week and I will be picking it up immediately. 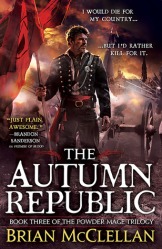 6) The Autumn Republic by Brian McClellan – The only finale to make the list, The Autumn Republic finished off a series I don’t feel close to done with yet. McClellan’s world is gigantic, and with the close of this series I feel like we have only seen the tip of the iceberg. Despite the ending feeling a little too quick, McClellan has finished a series to be proud of that maintains a high quality and exciting ride the entire way through. 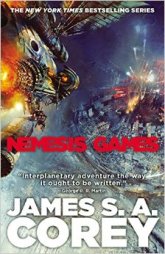 5) Nemesis Games by James S. A. Corey – The Expanse novels are rapidly becoming my favorite purchase every summer (as they are released consistently every year in June). This series has now released five out of its nine novels and I have been blown away every single time. Every novel follows new perspectives, new challenges, and pushes the conflicts to new heights. I do not know how Ty Franik and Daniel Abraham are going to top the levels of panic and excitement Nemesis Games gave me, but I have said that about every single release. The books continue to both be a continuation of the greater series, and almost completely self contained at the same time. If you haven’t picked up any of The Expanse series yet, or have been waiting to read more, I highly encourage you to do so. 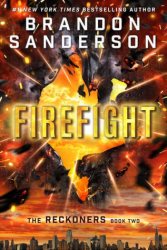 4) Firefight by Brandon Sanderson – Published early in the year, lots of people have overlooked this sleeper. Steelheart, a novel about powerless humans hunting super heroes, was a surprise hit with me. I decided to read it on a whim, despite not loving the premise,  and was blown away by the result. That being said, the first novel was very self contained and reached a pretty definite conclusion at the end, giving me a lot of concern where Sanderson was going to take the series or if it could remain good. The fact that Firefight is so much better than Steelheart was very hard to process at first. Sanderson takes his winning formula from book one, and makes it deeper, more intense, and simply a lot cooler. Sanderson’s talent for weird magic is on point with his collection of interesting super powers and the plot has a lot more emotional weight than it did in book one. The finale, Calamity, comes out next February and is one of my most anticipated books for 2016. 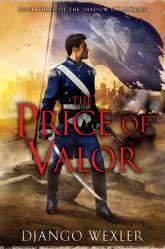 3) The Price of Valour by Django Wexler – The Shadow Campaigns keeps creeping up my lists the more and more I think about it. The third installment of five, The Price of Valour is proof that Wexler can learn from his mistakes and has no shortage of imagination. The Thousand Names, Wexler’s debut, was an incredible flintlock fantasy about a remote military campaign that was fast, exciting, and surprising complex. Its sequel, The Shadow Throne, was an attempt to expand the world from the first book and double the cast. While The Shadow Throne had a metric ton of new things I liked, it also felt like it lacked the exciting pace and style of Wexler’s Debut;however, The Price of Valour has it all. With the pacing and intensity of book one, and the amazing cast from book two, the third Shadow Campaign novel is the strongest so far and continues to unravel the gigantic web of mystery that covers the series. 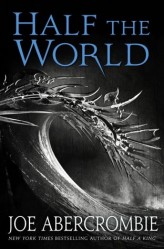 2) Half the World by Joe Abercrombie – Half the World is the strangest book on this list to me. The second novel of The Shattered Seas trilogy, it stands miles above its prequel and sequel. Half a King (book one) and Half a War (book three) were both good Abercrombie novels (for those of you who know what that means) but neither is close to the level of Half the World. The second novel follows two perspectives, Brand and Thorn, that play off of one another in a truly magical way. It is the story of two people finding their place in the world, realizing who they are, and going on a journey. I have never seen better use of multiple perspective and the book led me on a emotional roller coaster from start to finish. This book is definitely one of Abercrombie’s finest pieces of writing. 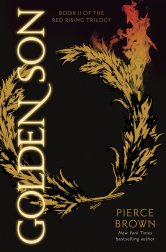 1) Golden Son by Pierce Brown – Red Rising is a really enjoyable book. It simultaneously steals all the things that are good from series like The Hunger Games, Game of Thrones,  and Ender’s Game while also creating both an imaginative and original setting and an exciting plot. It could simultaneously be described as a guilty pleasure, and an imaginative look as space colonization and class segregation. Red Rising had a pretty damn good thing going for it at the end of book one, and sets itself up to just reuse the incredibly powerful formula again in the sequel Golden Son… and then Pierce Brown decided to throw all of that momentum out the window and go in a completely different direction. The result is a book that felt like a massively different experience from Red Rising with the connecting theme being that both books are incredibly good. I was so confused as to why Pierce Brown would ditch his Red Rising gold mine until I was 10% in and read the entire book in one sitting. This book made me feel like a child again, discovering the wonder of reading for a first time and blowing my mind at every twist and turn. The finale, Morning Star, comes out in February and I highly recommend you check the series out.