We are wrapping up the pile of short book reviews, and have saved the best for last: The Murderbot Diaries, by Martha Wells. I had heard of Martha before this for her larger fantasy series, The Cloud Roads, and her Star Wars novels, but had not ever gotten around to checking her out (which is unfortunately true for several authors on my mountain of to-be-read books). However, after reading her short novels All Systems Red, and the sequel Artificial Condition, I will likely be bumping her books up the pile significantly.

In my opinion, the perfect novella has the following things: memorable and lovable characters, a fast plot with a narrow scope, and a clear theme/idea with excellent execution. I am actually less forgiving with a short book than a long one because I feel that when you have less space to work with, you need to maximize the impact of each page more than when you are writing an 800 page epic. And when using these criteria, there was one clear winner of the novellas I have recently read – The Murderbot Diaries. The series follows the titular Murderbot, a security robot who has hacked her governing module. This module suppresses her free will and would normally place her under human control, but after hacking it she controls her own destiny. Wells has written a science fiction setting in the far future where humanity is a galaxy spanning empire where cheap and greedy corporations are still in charge. As mentioned, Murderbot is a security robot who is loaned out to researchers who need protection in the field. Thanks to a mysterious incident, Murderbot finds her… its?… governing module disabled. However, in direct opposition to rogue AIs in most sci-fi novels, Murderbot decides to simply keep doing her job of her own volition, instead of trying to murder all humans. The first book All Systems Red, follows Murderbot doing her regular job of protecting researchers while also showing how she constantly has to hide the fact that she is rogue. She of course does not keep her free will hidden for very long, and finds herself in complicated situations she must navigate her way out of. The second book, Artificial Condition, is about Murderbot fleeing the events of the first novella and trying to discover the origins of the event that gave her free will. 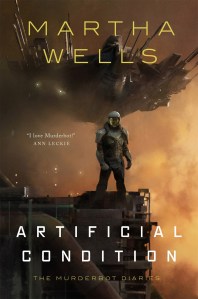 I say her because I get the distinct feeling that she is written to be female, but that might just be because I have a massive crush on her. Going back to my three pillars of a good novella, Murderbot is both extremely memorable and utterly lovable. There is something wonderfully charming about a powerful rogue AI just wanting to do her job and watch a lot of TV (which is her #1 favorite thing to do) just like anyone else. The first novella has Murderbot mostly interacting with humans (all of which will endear themselves to you), but the second has her spending some time with other AIs to amazing comedic and poignant effect. The characters in this series are wonderful, and you will find yourself caring deeply about their fates after a few pages – one of the hallmarks of a great novella. On top of this, The Murderbot Diaries nails my second and third pillars perfectly. The plot is simple, book one – find out who is trying to murder Murderbot clients and don’t reveal she is a rogue, book two – find out why she went rogue and don’t get caught. However, just because the plot is simple does not mean it is bad. The pacing and flow of the books are amazing, and I found myself unable to put them down from start to finish. I was heavily invested in the mysteries of both novellas and it resulted in me burning through them in a few hours. Finally, I like novellas to have a clear theme with great delivery. In this case I have already spoken about the series theme, a rogue AI defying typical sci-fi tropes, and the execution is flawless. The idea of an AI who just wants to do her job and watch media makes Murderbot seem incredibly human, while Wells’ descriptions of Murderbot’s emotional responses to basically everything simultaneously make her feel inhuman. These two emotions warred within me throughout both books and resulted in Murderbot coming off as an utterly unique character that I cannot wait to read more about.

I have no criticisms of this series other than I wish the books were longer and that there were more of them. Martha Wells achieves in 200 pages what most books struggle to grasp in 500. Murderbot is relatable, alien, adorable, badass, and wonderful all at the same time, and I cannot imagine a person who wouldn’t like her. If you have not checked out All Systems Red yet you are making a mistake, and be sure to grab Artificial Condition when it comes out in May (thank you Tor.com for sending me an advanced copy).