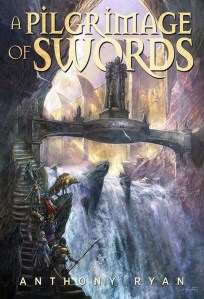 Anthony Ryan is having a busy year – not only did he just release the much anticipated, The Wolf’s Call, but he also has an upcoming novella from Subterranean Press. The novella is called A Pilgrimage of Swords, and I was kindly sent an advanced copy in exchange for an honest review. As such, here is my honest one-line take – I have never wanted to lift a book plot into a Dungeons and Dragons campaign more. It felt like highway robbery that this story was only a novella, and not a full book, as I was dying to explore the world and learn more about its characters.

The premise of A Pilgrimage of Swords is simple but elegant: 200 years ago in the book’s world, a god named the Absolved went insane and imploded the country he presided over, turning it into a wasteland called The Execration. Originally his lands were filled with countless magical wonders and beauty, but all of it has been perverted to grotesque parodies of what they once were – and all of the lands are hostile to those who venture onto it. His subjects have turned into flesh-eating monsters, the trees have turned into flesh-eating monsters, the random assorted rocks that litter the landscape have turned into fles– you know what you get the idea. Everything inside the Absolved’s country is terrible, so why would anyone ever go there? Well, because rumor has it that if a pilgrim reaches the center of this cursed land, they can find the mad god himself still residing there. If you are crazy enough to brave his lands and make it to him, there is a chance that the Absolved will grant you a wish.

As I mentioned, the route to the Absolved is a hellscape taken from the nightmares of Lovecraft, so not exactly an exciting prospect. Yet, there are those desperate enough to make the journey, usually when life has cruelly left them no other options. These poor individuals gather at the church of the Absolved, whose priests sacrifice their lives to send as guides into the wastes in order to better know their god’s will. As such, the pilgrimage is made in groups in order to increase chances of survival. Our cast is a group of individuals on one such pilgrimage. The cast has no names, for names are left behind when an individual takes this journey. Instead, each member of the party takes a moniker to represent why they are going on this quest. Our protagonist takes the moniker “The Pilgrim,” which doesn’t win many points for originality, but he has a cool possessed sword so I gave him a pass.

Our story follows The Pilgrim and his co-questers as they cross a variety of horrible areas of Execration. The guide provides a really easy storytelling mechanism and feels very natural as he explains what each area of the Execration used to be, and what it has become. Ryan has a great imagination and the various areas that he takes the reader through are super cool. However, the real fun of the book comes from the cast of mysterious adventurers. A large part of the book is figuring out tiny bits of information about the seven individuals in the party making the pilgrimage. Their personalities, and reasons for going on the insane journey, are slowly revealed over the course of the novella and make for a very compelling read.

The novella is short and sweet and I don’t have a lot of critiques for it. As always, because the novella was a lot of fun, I was left wishing it had been a full novel. The ending was probably the weakest part of the story, though I still liked it. I just found the worldbuilding and mysterious atmosphere to be stronger than the reveal at the end. One exciting thing about the ending is it left the doorway open for a follow-up novel, something I really hope Ryan pursues.

A Pilgrimage of Swords is an engrossing adventure for anyone who likes a story with a great atmosphere and imagination. It is short, sweet, and will leave you wanting a lot more. Regardless, the novella will keep you on the edge of your seat from the first to the last page, and I really hope that Anthony Ryan does more in this world. If you are looking for a new novella to mix up your reading schedule look no further than A Pilgrimage of Swords.