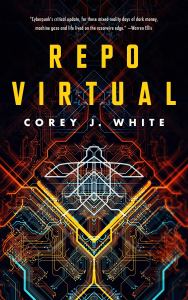 Repo Virtual is a peculiar and somber book that feels like a mash-up of different stories. Although it’s not quite a debut, as the author Corey J. White has a number of other publications to their name, we decided to put it in our dark horse initiative because not a lot of people seemed to be talking about it. The novel feels like it borrows storytelling elements from a lot of popular stories while also contributing its own original takes and ideas. The result is a fascinating and chaotic story of a possible near-future Korea where the virtual and the physical worlds are almost indistinguishable.

Although it doesn’t quite seem it, I think Repo Virtual might be a post-apocalypse story – even though the apocalypse in question is more like a quiet sigh than a big bang. The narrative follows the POV of Julius Dax, a bot technician by day and a virtual repo man by night. He makes his living by stealing gear and items in giant online games and selling them for hard currency. Julius lives in Neo Songdo, a city that is more virtual interface than stone and concrete. He is barely scraping by when his sibling brings him a job of a lifetime – stealing an unknown object from a reclusive tech billionaire. However, when it turns out the item he steals is the first sentient AI, everything goes south rather quickly.

On its surface, Repo Virtual is a fairly basic heist novel. The plot is serviceable, the job is exciting enough, and the characters are fun if a little cliche. However, the book really shines when it uses the heist plot to facilitate some fantastic social commentary as well as advance its pretty heavy themes. I would argue that Repo’s two biggest ideas are 1) that humanity is destroying its own existence through the facilitation of capitalism and 2) the rise of AI and how a new computer mind might see and change the world – both of which it explores in great detail. As I mentioned, Repo paints a bleak future for humanity. Through Julius, we get to see how hard literally everyone but a handful of billionaires work, how greedy fanatics make use of people’s anger and frustration, and how these things eventually fuel the collapse of society. It doesn’t inspire a lot of hope – but it is nicely balanced by the rise of the AI representing a new hope. The AI is like an inquisitive child and does a lot to provide a light at the end of a dark capitalistic tunnel. While I think that White did a good job arguing for his themes, I would point out that his arguments are not subtle. In fact, this is some of the most blatant and opinionated writing I have read in a while. In many ways, the book reads like a well written political paper more than a story – which weirdly works for me.

On the novel front, the world and characters are a mixed bag. Neo Songdo is bleak but feels like a well-realized and well-written possible future. The characters, however, are where things get a little uneven. Julius was great, though I did feel that his inner monologues sometimes felt a little redundant as he constantly thought about past injuries he cannot afford to have fixed, reminding the reader how terrible life is under a capitalist society that monetizes everything. On the other hand, the antagonists (who I don’t name to avoid spoilers) left a little to be desired. They felt cookie cutter and generic in comparison to Julius’ more dynamic personality, and I don’t actually think they added a lot to the story. Their entire side story would have functioned the same if the antagonists had been removed and replaced with “cops trying to stop Julius from committing crimes for good reasons.”

Repo Virtual feels like a poignant and clever criticism of capitalist society and commentary on AI wrapped up in a single package. The story is short, entertaining, and drives its points home well. While I don’t see this being the next blockbuster hit, it is definitely worth the short amount of time it would take to read, and it might make you think about the future trajectory of the human race. White has done a great job crafting a novel that depressed then uplifted me – all the while entertaining me with a kick-ass action-adventure.