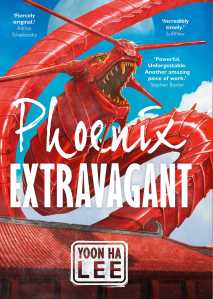 Yoon Ha Lee is a science fiction writer with a penchant for the strange and the imaginative. His Machineries of Empire series came out of nowhere a few years ago and wowed the pants off of myself and many other reviews. His work has a tendency to be surreal and confusing but with clever guardrails built in to get the reader invested long enough to understand what is going on. Since finishing his first trilogy, he has been a part of a number of different projects, one of which is a brand new stand-alone novel called Phoenix Extravagant. But while the premise of the story initially felt extremely strong, the book’s lack of substance eventually turned me off.

Phoenix Extravagant tells the story of Gyen Jebi, a young person in Razanei who is studying to become a painter. Normally this would be an admirable pursuit on its own, but in Razanei painting is a form of magic. Seals, enchantments, and simulacrums can all be created with the stroke of a brush. Jebi hopes to score well on the national placement exam and test into a strong government position to set them and their family up for life. This causes friction with their family as they are a part of a native ethnicity that has been oppressed and subjugated by the Razanei. However, as long as Jebi can earn a living and survive, they are happy to do whatever the Razanei asks of them. That is until Jebi catches the eye of an experimental division of the government. The group kidnaps their family as hostages and forces Jebi to work on a weapon of mass destruction (a fully animated dragon). Jebi must wrestle with their loyalties, discover what is important to them, and find a way to escape this predicament.

This premise has legs. I really liked the idea of exploring painting as a medium for magic. The first part of the book, which focuses on Jebi studying for and taking the placement exam, is great. The stakes are clear, the objective is relatable, and the painting is fascinating. Where the book starts to fall apart is after Jebi is kidnapped to work on the weapon. I just feel like nothing really happens. There is an interesting subplot between a growing relationship between Jebi and a soldier assigned to monitor them – but the majority of the book felt slow and directionless. The dragon simulacrum is exciting at first, but the plot line doesn’t really feel like it goes anywhere. Phoenix Extravagant feels like it is trying to do too many things at the same time and only manages to half-ass most of them.

Jebi is also just a boring character. They have no real personality or identity that I could find, and their actions are mostly dictated by dealing with what is directly in front of them. Their importance to the story feels unearned, and the book’s tendency to continually reveal that Jebi is even more special than originally thought feels cliché and boring. The supporting cast isn’t much better. We spend a ton of time trapped in small rooms with individuals who are uninteresting, so I never really got a good feel for the culture – let alone the differences between the groups at odds. The people and places were generally just unengaging.

I was pretty disappointed with Phoenix Extravagant and have a hard time finding many redeemable features other than its clever premise. After reading a number of Lee’s other works I have the distinct feeling that he could do better than this. If you are desperate for a fantasy book with a mechanical dragon and a focus on art, you might enjoy this – but I honestly think there are better pieces out there for even this niche combination. I, unfortunately, do not recommend Phoenix Extravagant.