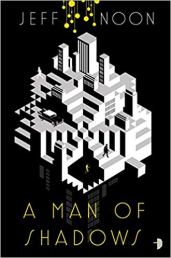 Jeff Noon’s A Man of Shadows practically bursts with promise, from the intriguing cover design to a captivating back-cover summary (despite the latter being plagued by a typo…more on that later). The distinct story elements scream off the page like a paperboy shouting headlines on a 1930s street corner: “It’s got noir! It’s got murder! An original setting! Mystery! Sci-fi and magical realism abound! Read all about it!” Alas, once the sensationalism and initial excitement wear off, the story must fend for itself. A Man of Shadows never stood a chance.

Jeff Noon’s sci-fi/fantasy/noir/crime novel plops the reader right into a fascinating world chock-full of promise. The book’s setting, a city half drenched in permanent darkness and half bathed in eternal daylight (so basically any Scandinavian city), frees its inhabitants from the shackles of time (… also like Scandinavia), allowing them to purchase timelines like any other commodity (so basically it just takes place in Scandinavia). Protagonist John Nyquist, a  borderline alcoholic, down-on-his-luck private investigator, is hired by a man to find his missing teen daughter, Eleanor. Meanwhile, a seemingly invisible murderer, dubbed Quicksilver, runs rampant, killing victims in broad daylight (or Dayzone, as the permanently lit sector of the city is called). Nyquist’s investigation rapidly evolves into a whirlwind of drug dealers, time sickness (which is mostly just highly dramatized exhaustion), conspiracies, dead ends, booze, and unearned half-answers that lead him to literally zero truths, even as he says to himself “The pieces are coming together.” His escapades also take him to the edge of Dusk: the mysterious, magical, and dark no man’s land between Dayzone and Nocturna (which is the name of the dark side, you get it). The plot rambles through these elements and hundreds more with so little grace that it’s hard to believe it comes to any sort of conclusion. The conclusion that does occur is nowhere near sensible or logical.

A Man of Shadows wears its problems and inconsistencies proudly, leaning into the inherent ambiguity of the noir/mystery genre. Noon kicks this off with his immediate abandonment of the novel’s main selling point: its setting. Instead, he favors meandering pseudo-explanations of timelines and how they function. In my opinion, this mechanic, riveting as it may sound, sets the stage for the book’s first and largest failure. I picked up A Man of Shadows precisely because I loved the idea of a city split by darkness and daylight. I yearned to discover how citizens might function. Instead, the world is built over the course of just a few stray paragraphs, and Noon opts to discuss at length, but with minimal detail, the workings of commoditized time. While that narrative choice makes some sense as the novel drags along, the story element remains unearned, unjustified, and under-explored until the last word. In other words, it felt like a gargantuan cop-out (editor’s note: get it? *finger guns*).

The issues continue with the characters, which are essentially silhouettes dancing across an already shadowy background. They’re almost exclusively monotone expressions of tired archetypes: A gumshoe P.I. with a likely drinking problem and troubled past? Check. Missing teen who claims she’s just misunderstood but makes no attempt to remedy the matter? Check. Doting father who claims he just wants what’s best, but is obviously hiding a terrible secret? Check. The list could be as long as the book itself, but I’ll spare us all the effort.

Now let’s talk plot. Mild spoilers ahead, so tread lightly. That’s a phrase which here means “Let me list a mere spattering of the myriad narrative problems that infect this book.” Nyquist’s investigation method? Walk around and hope someone approaches him with the answer. Quicksilver, the novel’s supposed antagonist, makes maybe four appearances–nee, mentions–before being used as a panacea at the end to solve quasi-problems no reasonable reader would care about in the first place. Customizable timelines are lauded as a method to keep businesses running 100 percent of the time; apparently, the genius who concocted this plan didn’t realize he could just divide the day into three eight-hour shifts and voila! Eleanor’s overbearing father has a stake in her safekeeping, but it’s way too low to justify his actions and orders that lead to the novel’s big “reveal,” or, more accurately, convoluted mess of semi-relevant information. Dusk, the neutral zone between Dayzone and Nocturna, is somehow magic, I guess? Finally, Nyquist’s internal drive to solve the mystery is about as believable as literally anything a politician says. His desire to figure things out is rooted only in his compulsion to be a P.I. Any semi-intelligent human would’ve just left the city, which, apparently, was always allowed.

Noon’s conclusion spews ambiguity with such reckless abandon that it made me question whether I missed something. It’s the kind of ending that people pretend to understand because they feel like they’re supposed to understand it. To top off my tirade, I counted nearly 20 typos and a handful of straight-up printing errors. If you’re looking for a reader to sell what little stock he owns in your book, typos and printing errors are the way to do it.

A Man of Shadows parades its original and gripping setting from the get-go, making it unique, at the very least. But once author Jeff Noon casts aside what I consider his novel’s best asset, the book has little else to enjoy.