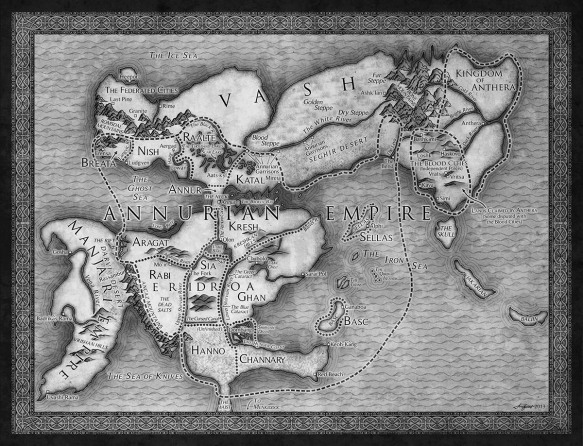 The Map for The Chronicle of the Unhewn Throne. Written by Brian Staveley. Drawn by Isaac Stewart.

Maps – They are one of the most basic elements of fantasy books and something almost everyone enjoys. I had the extremely good fortune to chat with the incredibly talented Brian Staveley, author of The Emperor’s Blades and The Providence of Fire, about what he thinks maps add to fantasy books. We discussed two questions:

To begin, I want to take a moment to acknowledge both Brian Staveley and Isaac Stewart’s work on the map in The Chronicle of the Unhewn Throne. The map’s level of detail, variety of terrain and accuracy of scale are all impressive and effectively brought this fantasy world to life. When I asked Staveley if his map was something he put a lot of work into, or if he was just a naturally gifted cartographer, he replied:

“I’m a fool for maps. I refused to use the GPS — I have a road atlas instead. Whenever I go somewhere new, I need to look at the map. My sport of choice over the last decade or so has been adventure racing — which involves finding your way from place to place using a map and compass. Given all that, I was pretty invested in the map-making for my own world, and I spent a lot of time as I write actually using that map. I’m constantly calculating things like ship speed and Kettral speed and horse speed over all different sorts of terrain in all different conditions. If the events of the book don’t fit the map, you’re breaking the promise you made to the reader.”

But why is a map so important to get right? In my opinion, it feels like a map’s purpose is first and foremost to anchor the reader’s immersion in the new world. It is the key to understanding locations and quickly grasping fundamentals in a book such as going east is harder than going west. It allows the reader to see for themselves that there is a river to be forded and helps get into the mind of characters. A map is also important because it makes topography permanent. When there is not a map, authors have a lot more liberty with locations because terrains can be changed and altered. However, when you have a map, suddenly landscapes become permanent and cannot change to make journeys easier to write. A map makes a world more real and less able to bend to the writer’s whim.

Turning to Staveley’s point of view on the primary purpose of a map, he commented:

“I think a map does a few important things. The first is the most prosaic: a map makes things easier on both the reader and the writer. The old saying about a picture being worth a thousand words seems to dramatically underestimate the worth of maps. I’d put a good map somewhere around ten thousand words. Any book worth its salt can stand without the map, but the map allows a writer to convey a wealth of information very efficiently. More, it puts most of the geographical information in the same place. Instead of asking the reader to stitch together two dozen passages scattered throughout the novel in order to get an accurate sense of the world, the map puts all that information in the same place.

So that’s what a map does literally. Metaphorically, however, the map is a promise to the reader. It’s no coincidence that almost all fantasy maps come at the start, before the text itself, rather than in an appendix or afterword. The fantasy map promises that the book contains a new world (or an interesting version of a familiar world), one that is rich, varied, and fully imagined, and that the world will be explored over the course of the story to follow.”

But, then I ask, does a map promise more than just new world? I would argue that some authors are too aggressive in their scope and map out entire worlds that they have no intention of exploring in their novels. In some cases, I believe that it can leave the reader frustrated and unfulfilled to see large areas of land that are never mentioned and never explained, doomed to fade into descriptions like “that area to the north that we know nothing about.” Should authors feel obligated to shine light on every corner of their map? When I asked Staveley his thoughts on the matter he said:

“In making my map, I wanted to create a world with enough scope to tell this story, and other stories to follow. While we won’t explore the whole thing during the Chronicle of the Unhewn Throne, we’ll get a good look at almost all this terrain in the next five years or so. I could have waited until I got to those stories to expand the map (and, indeed, I’ve left room for expansion to the south and east, and over the pole), but I wanted even the small references I make in this trilogy (to places like Freeport, for instance) to fit with other tales to come, tales that might actually be set in Freeport. That meant I had to imagine this entire section of the world in one go.”

I think Staveley makes an excellent argument for large sweeping maps with unexplored land. I think he also shows there is a difference between leaving white space for future books and making an overly large map simply to shock and awe. Does that mean that authors cannot expand maps? Of course not. Series like Blood Song by Anthony Ryan and Half a King by Joe Abercrombie do a great job expanding their maps as their stories progress, and it works incredibly well for them. However, there is something to be said for an author who shows you their entire atlas at the beginning of their story and gets you excited about every single river, valley, mountain range and kingdom you are going to explore and visit. Regardless, maps are important. As an author, you should give a map the time and attention it needs to be a visual representation of your novel. As a reader, you should pay attention to these beautiful works of art because a good map will make you appreciate every mile on a road.

P.S. I want to give special credit to any author who takes the time to provide mini-maps of cities. Huge sweeping maps of the world are less useful if a novel spends 90% of its time confined behind some walls.