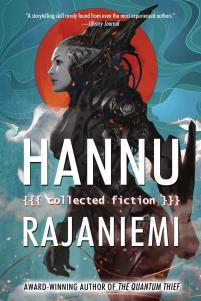 In between the larger books I read for review, and for my own personal enjoyment, I like to read smaller works to fill my down time on the subway or right before I go to sleep. As such I decided to pick up a collection of short stories to kill time. Enter Hannu Rajaniemi. Hannu is the author of the critically acclaimed Quantum Thief trilogy; a hard sci-fi series about a quantum thief (a profession I am still not entirely clear on). Unfortunately for Hannu, I have heard very mixed things about the Quantum Thief trilogy ranging from love to hate. As such, I figured I could kill two birds with one stone by checking out his writing in his collected fiction and gain some smaller pieces to read while I traveled.

And it turns out that Hannu Rajaniemi’s Collected Fiction is definitely good enough to kill at least two birds, probably three (which is how I will now possibly be rating books). The first thing I will say about the book is that it has something for everyone. Hannu is extremely creative and has a ton of great ideas. As such, the book is filled with a plethora of stories from every kind of sci-fi, some fantasy, and even things like horror and historical fiction. I found myself excited for my next train ride to find out what tale I would get to next and how I would like it on the spectrum of things. There were stories about ghost astronauts, dragons who are bffs with computer servers, cyber gods, a voodoo identity crisis, magical fish, cyber plagues, transdimensional dogs, histories of planets, and much more.

On that note, I found the stories to be of varying levels of enjoyment. However, I found that my enjoyment of the tales very often had to do with my taste, as the stories that I liked less were simply about subjects that I did not find interesting. Additionally, there were only a few stories I did not like. For the most part my feelings of the stories ranged from good to great. Hannu seemed to do very well in a short story medium, packing tons of excitement and emotions into quick reads. The tales all felt like they fit the short fiction medium, and the works felt like they had the impact of larger novels despite their small size. The writing was clean and the prose was good; showcasing worlds, science, and magic from tons of stories to a dazzling effect.

I will say that after reading the collected fiction I can understand where some of the Quantum Thief criticisms came from. Hannu seems to focus on explosive creativity and wild ideas much more so than structured world building and clear plot. This is in no way is a bad thing, and it serves to make the books more fantastical to those who go into it with a desire to flex their imagination. That being said, at times the workings of the stories went over my head and in multiple instances I found myself wondering if I missed information due to a lack of technological know-how.

Despite this, Hannu’s collected fiction has inspired me to both pick up the Quantum Thief and to explore other collections of short stories as I found his tales much more satisfying that I expected. If you want to dream of other worlds and scientific marvels, and want to do it in bite size pieces, I highly recommend checking out Hannu Rajaniemi’s Collected Fiction.