New York Comic-Con has come and gone this past weekend, and what an experience it was. If you ever get a chance to go to a Comic-Con I highly recommend it. This was my first, and I only went because I live in NYC and a few authors I wanted to meet were supposedly going. What I did not know is that the publishers of the fantasy and science fiction world turn out in force, with an army of famous writers under their wings. Authors are my heroes. The books I read when I was younger were a large force in shaping who I am today, and I have undying respect for their creators. As such it was a little daunting to realize I was going to meet so many of them at once. However, my fears were baseless and it was a tremendously fun experience. I met more than 20 famous authors; sometimes just having casual conversation, sometimes getting books signed, and sometimes squealing with glee. However, for me New York Comic-Con was also a deeply thoughtful time, where I realized with renewed fervor why I love authors and reading. Authors are celebrities, heroes, and great people. Every single interaction with every author I met was positive, but I want to highlight two to give you an idea of what I am talking about. 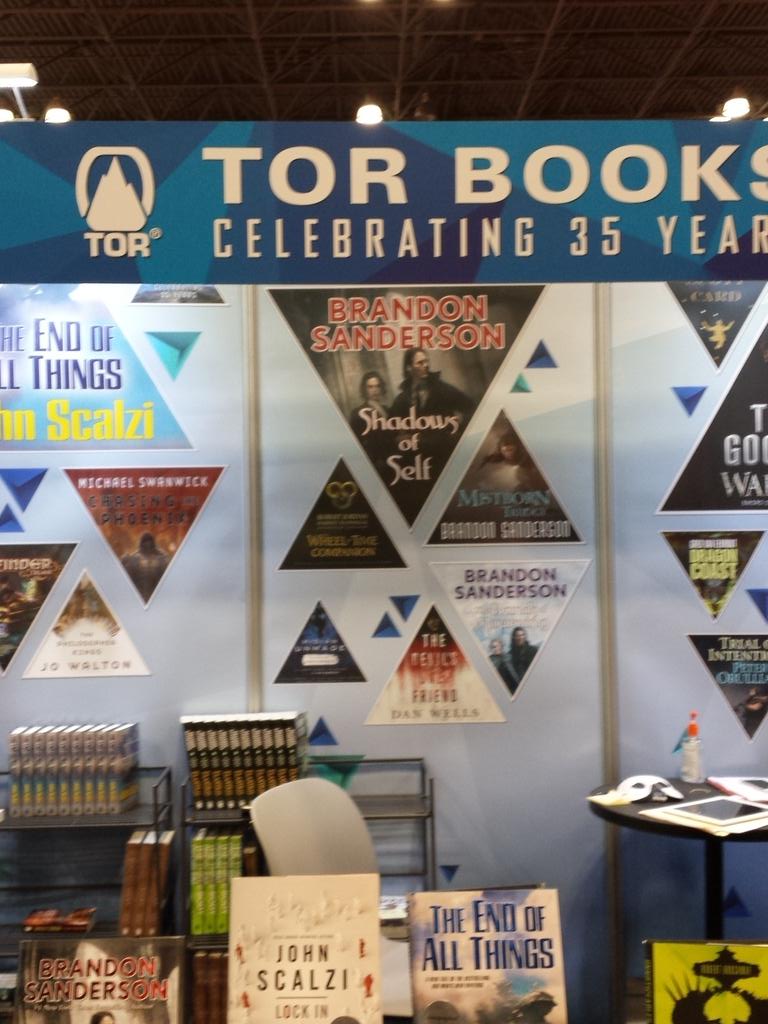 The second really fantastic example I have of this is the lovely Myke Cole, author of Control Point, Gemini Cell, and other books. When I first got into NYCC I was overwhelmed by the number of things to do. However, I noticed Myke was doing a book signing right at the start of the day, and decided to run over and get in line to meet him while I figured out what else I wanted to do. While I was in line to meet Myke I noticed that an actor I like was also doing an autograph session… for $80 a signing. I love the actor’s work, but this seemed really steep to me for what was likely going to be a few seconds with the star. As I was pondering this, I reached the front of the line and got to meet Myke Cole. Myke asked me how I was doing, what my plans for Comic-Con were, where I got my jacket because he liked it, where I was from, and a bunch of other earnest questions while he signed my book. He also answered all of my questions about him, and by the time he finished signing he had me feeling like we were friends. For someone who is a fan it was a heartwarming experience, especially in light of how much other celebrities were charging to just get their signature. But this wasn’t even the end of my Comic-Con experience with Myke.

The love of reading science fiction and fantasy permeated every single person I talked to this weekend, and it was a uniting force across the entire event. Whether it was the Del Ray editor talking about how how lucky he is to be paid to draw maps, or authors asking me if it is ok to pause a conversation because they see another author autograph whose autograph they want, or getting over 30 free books because people just wanted their work to be read, Comic-Con helped me find new levels of love for the authors who are my heroes and I cannot wait to go back every year.

One thought on “Stories From Comic-Con: Authors Are Fans Too”