Drenai part three, the re-Dre-aning. Welcome back to my semi-journal of my slow and wonderful experience through the Drenai Chronicles. At this point I am pretty confident in saying that this is probably one of the best fantasy series of all time. I may only be about 3/4ths of the way through, but the books would basically have to literally blind me at this point to lower their overall score enough for me not to recommend it. However, these next three books on my journey were definitely the weakest so far (comparatively, they are still excellent) so we will have to see. Up first, The Legend of the Deathwalker! 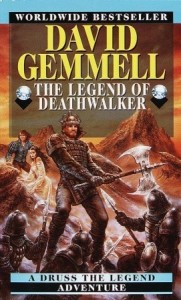 Book 7 – The Legend of the Deathwalker – The third of the four Druss books, this novel picks up the story of Gemmell’s iconic character shortly after the conclusion of book six. This book starts in the middle of Legend and opens with Druss telling a previously unknown story about himself to a fellow footsoldier to calm the younger warrior. The book follows Druss and Sieben as they journey into Nadir lands to defend a people they hate from a crime they know is wrong. It is a story about doing something for people you don’t like because you know it is the right thing to do, and Gemmell handles it masterfully. The book also follows the rise of the Nadir people, prepping for the inevitable uniter that will raise hell in Drenai book one, Legend. This book lost a very small amount of points because it felt like its goal was more to add depth to Legend than stand on its own, but it is still incredible in its own right.

Racism is a big issue that Gemmell tries to tackle and discuss in all his books, and does so very successfully. None of them (at least so far) do it better than The Legend of the Deathwalker, which has probably my all time favorite quote about overcoming bigotry by Sieben (not pasted here because spoilers). The book also has a massive arc of character development for Sieben, and brings him to the forefront of Legend of the Deathwalker as a protagonist instead of a support character. It is a fantastic choice, and Sieben adds more depth and richness to the story than Druss could by himself. The book is also much more magical than any of its predecessors. I am not sure how much I like this turn, as I have grown accustomed to enjoying magic take a back seat to warriors in Gemmell’s stories. However, this Druss novel is still quite enjoyable despite not quite living up to its predecessor. 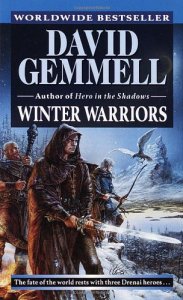 Book 8 – Winter Warriors – The eighth Drenai book, and probably my least favorite, is about demons. It is strange to me that this book that breaks out of the Drenai mold more than any other is likely the most unique, and is less enjoyable for it. Our story is set far in the future compared to all the previous Drenai novels, chronicling a team of heroes as they try to survive a coming demon apocalypse. The world is reaching it’s end, demons are passing over from the other side, and starting to ravage the land. This previously mentioned group of heroes must keep an infant king alive from otherworldly terrors in order to prevent the end of times.

If this seems somewhat confusing, then it mimics how I felt reading this book. Winter Warriors comes out of left field and departs from the classic Drenai formula that made all the other books work. Instead we are treated to some great characters struggling helplessly to deal with an otherworldly problem. The character depth and growth in the book are just as good as any other Drenai novel, but the plot felt strangely divorced from the previous seven books, and seems to be telling the end of a story that I missed 50 percent of. It turns out the beginning of the demon’s story is covered in book nine, Hero in the Shadows, and I honestly would recommend reading them in reverse order for the most enjoyment. I admire Gemmell for trying to mix up the story, but I was not in love with the result. Hopefully book nine will be back to the tried and true hero on an impossible quest with lots of political world building.

Book 9 – Hero in the Shadows – The final Waylander book. It still has a lot of magic, a great plot to go with it, as well as the glorious Waylander. Hero in the Shadows tells the story of Waylander at the very end of his life. An old man, he has seen and done everything, but becomes unsatisfied with life. In the search and preparation for new horizons, he stumbles upon an otherworldly problem, and sets about fixing it with his normal solution – crossbow bolts. Hero in the Shadows contains the same demon theme as Winter Warriors, but it takes a back seat to the final story of Waylander. The magic injected into the story does a much better job being subtle and adding to the world, as opposed to being jarring as it was in Winter Warriors.

Many Gemmell stories deal with an older warrior dealing with passing his prime and moving into old age. It is a particular flavor of story that I believe Gemmell does incredibly well in a fantasy setting, and I look forward to rereading these when I am much older myself. Hero in the Shadows in particular deals with running out of things to do. Waylander has lived a full and challenging life and is finding he is extremely bored in retirement. Immensely wealthy and wanting for nothing, he has begun to risk himself unnecessarily to feel alive again. It might sound cliche, but I found myself empathizing with Waylander immensely and found myself searching for meaning within my own life. The book continues in the Drenai tradition of teaching philosophies on life that are both profound and extremely simply. Hero in the Shadows brings a fitting end to the story of one of my favorite protagonists, and brings me ever closer to the end of my Drenai journey.