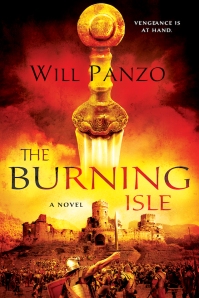 Recently I had the pleasure of reading one of the more interesting debuts this year, The Burning Isle by Will Panzo. In a stroke of luck, I actually got to meet Will (he was lovely in case you were wondering) at New York Comicon. I got the chance to talk with Will about his new book and ask a panoply of questions about the future of the series. I was sad to discover that it was not the first part of a trilogy, but a standalone. Although there will be additional books in the world and with the same characters. If you are interested in The Burning Isle, or have read it and want to find out more, check out our conversation below:

How has your time as a Comic book writer influenced your writing of fantasy? What are the key strengths, weaknesses, and differences between the two formats for you?

I was an editor at Marvel comics for a few years. I worked mainly on the X-Men family of books, which was a huge thrill for me as the X-Men were my favorite characters growing up. In terms of direct influence, I always appreciated how fearless and boundary pushing comics could be, particularly mainstream superhero comics in their formative years. Pick up any issue of Lee and Kirby’s Fantastic Four run and you’ll find a dozen ideas in there, each worthy of their own story. I try to emulate some of that fearlessness in my own writing, but aside from that, comic book writing and prose writing are so fundamentally different it’s hard to compare the two.

The Burning Isle feels like it could be larger than a trilogy by the end. Do you have a set number of books planned out?

The Burning Isle is a standalone story. The book I’m working on now takes place in the same world, but in a different location. Cassius is one of the main characters in the story, but not the only main character/ I’m writing it in such a way that you won’t need to have read The Burning Isle to read this new book, but if you have, they’ll be some deeper layers to the story. If possible, I’d like to continue writing books this way, as standalones that together deepen the lore and scope of this shared world. I don’t have a set number in mind. But I have the rough idea of three to four more stories.

Do you think revenge stories are more difficult that other plot types?

I’ve always loved revenge stories. There’s a part of me that can’t help but root for someone on a quest for revenge, even though I know that quest never ends well. There are certain difficulties inherent in a revenge story though. It can be hard to portray someone as sympathetic when their driven by the need to settle a score. Revenge is a dark quest, and it takes a toll on those who seek it. Fortunately, I like stories with morally ambiguous characters and there feels like a groundswell movement in the fantasy world towards those types of stories right now. So it seems the perfect time to tell this kind of story.

We only spend a brief time with Cassius at the Isle of Twelve. Will we get to learn more about his time at his magical school in future novels?

Absolutely. The masters of the Isle of Twelve are nothing if not cruel. They don’t forgive, they don’t forget. The manner in which Cassius left the school was a great insult to them, an insult they’ll seek to remedy by any means necessary. Cassius knows the masters will stop at nothing to hold him accountable and he’s certain a reckoning is in his future.

Cassius’s rune magic is one of the best parts of the book for me, what was the inspiration for the system?

There were two, sort of, abstract ideas that I wanted to incorporate in the magic of this world. First, I wanted Rune magic to be a relatively recent magic development that borrowed from older traditions, while also greatly upsetting those traditions. Antioch is a kind of fantasy version of ancient Rome. And we know Romans often appropriated and modified aspects of other cultures to suit their own needs. They took the idea of democracy but discarded the parts they didn’t like, added their own ideas and made Roman Republicanism. They took the phalanx, modified it, and made a professional army that conquered half the world. They stole the Greek pantheon and recast them to reflect Roman values. If magic had existed in the ancient world, Rome would have appropriated it and bent it to suit Roman needs. That’s exactly what Antioch has done.

Secondly, I wanted magic to be a commodity. A thing that could be traded and sold. That’s where the gems came from. I liked the idea that if you defeated a spellcaster in battle, you could reach down, pluck his gauntlets off his body and, in an instant, have all of his power at your fingertips. Literally. I really liked the idea that magic was a product instead of something esoteric. It makes it a little more crass, a little more street level, and allows for magic users to be unlike the wizards and sorcerers we’re used to.

One of the strongest things that The Burning Isle has going for it is the complicated and delicate political situation you have designed that is balanced on a sword point? How did you plan out and create this criminal ecosystem?

The novel’s structure borrows from stories where a mysterious stranger arrives in town, finds it controlled by two rival gangs and plays them against one another for fun and profit. We see this in Sergio Leone’s western A Fistful of Dollars and Akira Kurosawa’s Yojimbo. There are other elements to my story though, particularly the revenge angle, which required some more depth to the political structure. And given that this is a novel, instead of a movie, I had some time to elaborate on the world a bit and explain how we came to have an island ruled by rival crime bosses.

In order for criminals to openly steal control of an island like Scipio, there hard to be a power vacuum, because a functioning government isn’t going to let that happen. In asking why government doesn’t function in Scipio, I came up with the idea of a city with no laws, but one purposely designed that way so that the seedier, but still profitable, activities that a lawful society doesn’t want to tolerate could be contained in one place. Once I had that nailed down, I had to figure out how these two particular bosses came to power and what drove a wedge between them. Without spoiling too much, I came to a solution that involved the subjugation of the island’s native population, which also incorporated the Antiochi legion present on the island, as well as laying the groundwork for our revenge tale.

What are your personal favorite fantasy authors and books, and did you draw any inspiration from them for The Burning Isle?

I’m a huge fan of Robert E. Howard, who is most famous for his Conan stories, although he wrote much more than that. I also love Michael Moorcock, Glenn Cook, David Gemmell, Fritz Leiber, George RR Martin, Joe Abercrombie, Mark Lawrence, Richard Morgan. This list can go on and on.

In writing, I think you draw inspiration from everything you’ve read, consciously or unconsciously. It’s probably easier to connect the dots from me to some of those names than it is to others, but they’re all there. I wouldn’t be the writer I am today if I hadn’t read each of them.

In addition, what are your favorite comic books?

I think everyone’s favorite comics are the ones they grew up reading. For me that was early nineties Marvel superhero stuff, with the X-men at the top of that list. For me, Wolverine the way Larry Hama and Barry Windsor-Smith wrote him will always be the real Wolverine.

As you get older though, your taste tends to change and you seek out more complex stuff. It’s easier to name creators than it is individual titles, so I’ll just say I really enjoy Alan Moore, Frank Miller, Grant Morrison, Warren Ellis, Ed Brubaker, Matt Fraction. Also I’m a little late on this one, but I recently discovered Jonathan Hickman’s work on Fantastic Four and New Avengers and thought it was great. But right now I’m reading his Black Monday Murders and it’s pure genius.