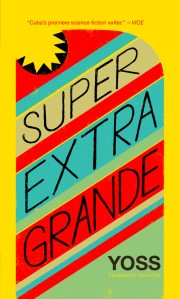 The Quill to Live is approaching its 2nd birthday, and correct us if we are wrong, but I think we have proven we are pretty good at reviewing books. We have a diverse group of readers in the back slaving away reading books, compiling our thoughts, and synthesizing analysis as to whether or not a book is worth your time. I like to think we are getting good at breaking down and objectively thinking about the quality of books. However, this month we have read a book for our book club that calls our skills into question because a lot of us honestly can’t decide what we think of it.

Introducing Super Extra Grande, by Yoss, a short book about the life of a space veterinarian who specializes in very large animals. The book tells the story of Jan Amos Sangan Dongo, a boy who grew up to be quite large and decided to study animals who shared this trait. The book starts with him treating an animal, then spends some time talking about his life, and ends with him treating another large animal. In the course of these three events he exposes a lot of philosophy and world advice that runs the gamut from enlightening to offensive. The book is all over the place and each of us had a wildly different reaction. Due to this, we are casting aside our traditional synthesized opinion and breaking our reactions out:

I don’t get this book. At first I thought it was just a fun jaunt, but it got a little too offensive too quickly for me to enjoy it with just that mind set. It is highly misogynistic on paper, but by the end I started to realize that it might be satire that was completely going over my head. I really enjoyed the world building, but the setting seemed at odds with the protagonist whose outlook on everything seemed to come back to how it would benefit him. He seemed like he might be an unreliable narrator, but I genuinely couldn’t tell if that was intentional or not and it left me reeling. By the end I guess I enjoyed myself while reading the book. I was a fan of the large animals, but the commentary kinda left me upset. It puzzles and upsets me that I could read a book and my big thought when I come to the end is “I liked the animals”.

That’s where it get’s weird for me, because…well, I still don’t like those things but I really enjoyed Super Extra Grande. The protagonist was something of a misogynist, but it never felt mean-spirited or like he was trying to explain it away. I didn’t like him, but not only did I get the impression that I wasn’t supposed to, I felt almost as if the fact that he was mostly unlikeable was part of the commentary of the novel.

The juxtaposition of such a hilarious and fun concept (a future veterinarian who only deals with absurdly large and weird alien animals), with someone who seemed like the guy at the office that doesn’t really bother you on a personal level but you don’t want to spend a lot of time around really worked for me. It was reminiscent, to me, of the Alien films or the Star Wars franchise. Specifically the idea that even though it’s the future, people are still people and the problems of the world don’t really ever get solved so much as dealt with daily. I think that underlying message (at least that’s what I took from it), combined with a universe and story that reminds me of a hybrid of the Discworld and Hitchhiker’s Guide to the Galaxy stories really resonated with me. I don’t think everyone, or even most people, will like this book but I definitely recommend everyone at least check it out to form your own opinions.

Super Extra Grande took time for me to orient in my head. The relationships that Dongo has with his secretaries initially bothered me because it didn’t explore them as people, and it saw them mostly as sex objects. However if your think about it in a satirical way, and see that as the most basic setup of the overall story line, it makes way more sense that he didn’t include more dialogue from the women in the book. Something that helped me orient my thoughts was actually reading reviews on both sides (highly positive and negative). The middle ground reviews were unhelpful, as this is a book that requires dissection and if you don’t dive in and break it down, you are going to bounce off. It’s a weird book and there was a lot that I liked, and not a whole lot that I loved. I almost want to read it a second time and see if I change my mind.

In conclusion, for once we don’t really have a recommendation for Super Extra Grande. Instead, we would love any readers who have read the book to tell us what they thought of it in the comments to this post because we are dying to hear more.