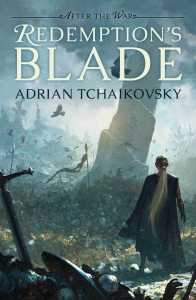 One of the best books I have read this year was Children of Time, by Adrian Tchaikovsky. It was an incredible take on the ideas of evolution and what makes someone human along with a interesting narrative style. I thought Children of Time was so good that it made me want to dive in to Adrian’s vast catalogue of books and read more. Solaris/Rebellion was kind enough to facilitate this desire and sent me an ARC of his newest book, Redemption’s Blade, in exchange for a honest review.

Redemption’s Blade has a plot that should appeal to most fantasy readers. The story takes place in the immediate wake of a gigantic war that touched almost the entire world. A demigod, named the Kinslayer, decided that he was no longer keen on his God given mission to protect the mortals of the world. Instead, he thought it would be a lot more fun to consume his brethren (which earned him his name), cast down the gods, and enslave all mortals. His war for domination was cut short when he was sliced in half by a group of heroes and some of his minions that turned traitor. One of these heroes was Celestaine, who goes by Celest, who is finding herself a bit lost in a world that regards her as one of its saviors. In order to find some meaning in her post-hero life she sets out on a journey with a group of the Kinslayer’s ex-minions to try and right some of the wrongs that the demigod committed in his war.

Redemption simultaneously evokes classical quest fantasies like Lord of the Rings, while also being a non-stop avalanche of original ideas and worldbuilding. We follow Celest as she travels across the world looking for an artifact of incredible power to heal the people the Kinslayer mutilated. On this journey she recruits a number of interesting characters to her cause and takes you on a tour of a number of horrors that the Kinslayer created. The plot is enjoyable, but slightly predictable (which was fine). Where the book really shined was its world, as Tchaikovsky really knows how to build atmosphere and story set pieces. I was filled with childlike wonder as I read about strange creatures, cool swords, weird races, and despicable crimes. So while the plot of the book can sometimes feel a little shallow, Celest’s journey is simply a lot of fun and honestly that is the most important quality for a book to have.

If I had to pick a flaw to talk about, it would be Celest herself. The characters of the story are, on a whole, fantastic. The party members, side characters, and antagonists all succeeded in getting me emotionally invested and caring about them as people. However, Celest felt like she struggled as the central POV as her character began to feel a little one note as the book ran on. Her inner monologues get a little bit repetitive, and she tended to harp on the same ideas (such as “are these ex-evil minions my friends or tools that I am using?”) a little too often. This is a shame because her various party members were a buffet of deep personalities.

Overall, I enjoyed Redemption’s Blade a lot. It is a very fun book with a lot of astoundingly cool ideas that I think almost any fan of the fantasy genre would enjoy. It loses a little bit of steam towards the end, and Celest could use an injection of personality, but I would still recommend it to anyone who asks. In the meantime, my second foray into Tchaikovsky’s work has only cemented my belief that he is an unique and imaginative author that I need to read more from, and I can’t wait to get my hands on his next book.

One thought on “Redemption’s Blade – Stuffed To Bursting With Imagination”