While updating my Goodreads reading status for Charmcaster and Soulbinder, books three and four of the YA Spellslinger series by Sebastien de Castell, I noticed an upsetting fact: Spellslinger has a depressingly small number of reviews for its high level of quality. I have already spoken at length about both book one and book two and mentioned how much I enjoyed them. Recently, Orbit publishing was kind enough to send me ARCs of the next two entries in the series (thank you to everyone at Orbit). I am happy to say that the books continue to be amazing and that I read Charmcaster in two days and Soulbinder in a single night. Now that I have spent four books in de Castell’s incredible world, I feel better prepared to talk about what makes this magical series.

In short, they remind me of Harry Potter. When I make that claim, I do not mean to imply that the books have similar plots, settings, characters, or even magic – although both books do follow a prodigal wizard as he sets about trying to save the world from magic evildoers. When I say the books remind me of Harry Potter, what I actually mean is that Spellslinger has the same emotional urgency and investment that I felt Harry Potter had as a child. Both series have ok writing, a fairly simple plot, and lovable but slightly shallow characters. However, both series are written with some of the best pacings out of any books I have ever read, cannot be put down once they are started, and most importantly – are just a lot of damn fun. 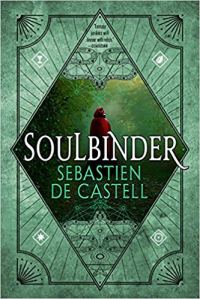 I was talking with a co-contributor yesterday as I tried to get my thoughts in order about Soulbinder. Essentially, my issue was I didn’t know what kind of rating to give the book. On the one hand, Soulbinder (and Charmcaster) aren’t even in the top five deepest books I have read this month. They don’t demonstrate prose that stands out in the fantasy landscape. They don’t feel like brilliant works of literature. But, they are possibly the books I enjoyed most in the entire last year. These books are simply a good time. The plot may be simple, but I was more invested in it than the various other webs of intrigue I have read this year. The characters might not be extremely deep, but dear god does Kellen resonate with me. I slip effortlessly into his shoes, understand his woes, and revel in his victories. The prose might not be on par with Tolkien in excellence, but the books make me laugh. They are extremely fun, from start to finish. And as my co-contributor so helpfully pointed out, isn’t that the most important thing about reading?

People read for a lot of reasons: fun, prestige, self-improvement, aesthetics, and more. There isn’t a better or worse motivation for picking up a book. However, I personally will take a book that is fun over any other quality any day of the week. Charmcaster and Soulbinder both deliver fun by the truckload, as do the first two books, and I would recommend them to any reader of any age. They aren’t going to astound you with literary brilliance, but you probably have so much fun reading them you won’t realize what time it is until it is 4:00 AM – and here at The Quill to Live, there is no higher standard of excellence than a book that results in irresponsible reading until the early morning hours on a workday.

3 thoughts on “Charmcaster And Soulbinder – Fun Is King”