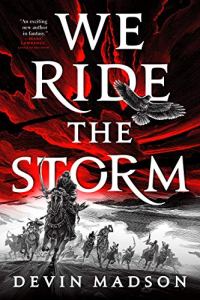 Self-published books are a really interesting conundrum. On one hand, they represent some of the best finds and recommendations a reviewer can make due to their unknown nature. On the other hand, while there are some very good self-published books, there are a lot of really bad ones. What is particularly exciting is when other reviewers, or publishing companies, find great self-published books and bring them into the limelight – doing the work of discovery for you. This is the case with We Ride The Storm, by Devin Madson, a finalist of Mark Lawrence’s self-published blog off and a new acquisition by Orbit publishing. I was excited to dive in when Orbit sent me an early review copy so I could lavish praise on this interesting new series, but I soon realized that would be complicated.

We Ride the Storm uses a classic epic fantasy format: three distinct POVs each tell a piece of a collective story, trading off the narrative lead in succession. First, we have Miko, a princess held captive by her step-father who resents her for her true lineage. Then we have Cassandra, an assassin with a ghost riding in her head with some addiction problems. Finally, we have Rah e’Torin, a warrior exiled to a foreign land who finds himself forced to fight in a war he has no stake in. These characters do a great job fleshing out different parts of the world and slowly building out a world-building tapestry that does a great job painting the Asian-inspired epic as a living and breathing place. The cultures do a nice mix of drawing from multiple Asian cultures, including Mongolian, but don’t rely too heavily on the real world. The various nations and peoples of Storm have their own flavor and flair, and it is a nice mix of old and new. However, while the world is pretty fantastic, the characters that live in it are not.

Each of the three protagonists I mention sounds engaging and exciting on paper, but ultimately they fall flat. As a reader who primarily seeks out character-driven stories, I struggled to enjoy Storm because I disliked almost every character. I enjoyed Cassandra the most, but she was still fairly irritating for most of the story. The other two leads (Rah and Miko) had interesting backstories but felt like they had zero agency for too much of the story. I really didn’t like the side cast members, and some of them did things that were almost offensively dumb. My personal favorite was when a character went into a throne room and committed really aggressive treason when he knew the penalty would be death. When he was asked what his plan was he essentially says “I didn’t have one, I guess I will die,” gets executed, then the book tries to paint it as tragic. No, I will not mourn that dumb-as-bricks idiot. Hard pass. And while I understand that each of the characters lacking control in their lives was a major theme of the story, it led to no one feeling like they had agency on the plot.

But, while I didn’t really connect with any of the cast, I was impressed with the mechanical writing of the story. Madson’s prose is surprisingly good for someone who has primarily self-published. The narrative has a perfect mix of detailed descriptions that aren’t too flowery but really pull you into the rooms, buildings, cities, and outdoor locales that the various characters visit. I was easily able to distract my frustrations with the cast by listening to Madson describe the beautiful and horrible sights you travel through in the course of the book.

We Ride the Storm was very much a mixed bag for me. My frustrations with the cast really hurt the chances this book was going to hit it off with me, but the world-building and prose did an impressive job keeping me invested and intrigued enough to finish it. I likely won’t be going back for a second installment of the series but if you like the characters I can definitely see why some people love this novel. However, it personally wasn’t for me.