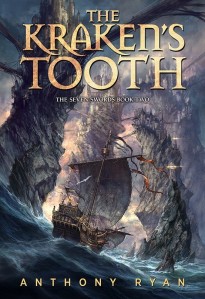 The real takeaway I got from The Kraken’s Tooth is that Anthony Ryan is a strong writer. I obviously already knew that, given my familiarity with his other work, but it’s nice to be reminded that the authors you like are good at their craft. The Kraken’s Tooth is the second installment of a seven-part novella series called The Seven Swords that Anthony Ryan is writing for Subterranean Press. In my opinion, the physical copies are a bit cost prohibitively expensive due to being collectible (which is a bummer for physical book lovers), but the digital versions are very reasonable. Normally I don’t mention the price and publisher when talking about a review, but in this case, I think it’s important to point out the roadblocks that will keep this body of work from being better known because I want you to jump them and go check The Seven Swords out.

The series tells the story of a man questing to find seven magical swords for reasons I don’t want to spoil. My review of the first book, A Pilgrimage of Swords, dives deeper into the series’ premise. All you really need to know is The Kraken’s Tooth picks up where Pilgrimage leaves off and unsurprisingly tells the story of one of the seven swords our protagonist (called the Pilgrim) is seeking. The plot brings our Pilgrim to a new Venetian style city, where the entire urban area is supported by a kraken’s heart deep underneath the streets. The Pilgrim’s arrival kicks off a multi-party race for the heart to see who will reach it first and claim the power of the heart for themselves.

I think what’s really interesting about The Seven Swords is it kinda feels like reading a fantasy book blueprint. That isn’t to say the novellas are unfinished, but that they are stripped down to minimalist plot points to keep the meat of the story moving. It feels like looking at the bones of a book and reading the author notes that tell you what the major story beats are, and it works. Ryan has really good ideas, which is particularly impressive for a fantasy subgenre (sword and sorcery) that is considered by many readers tired and cliché at this point. His writing (excuse the pun) has teeth. The Kraken’s Tooth has a real feeling of adventure around it and it sparked both my imagination and my love of fantasy with its fun and thrilling story.

On paper, The Kraken’s Tooth is a dungeon crawl where the party needs to surmount traps, decipher riddles, and kill monsters to reach the treasure beneath. What I love about it in practical terms is it refuses to be boring. Ryan never phones it in, and all of his ideas stick in the mind. It’s a raucous story that is easy to consume and discuss. It’s the perfect snack to bring a little fun and excitement to this depressing year.

There isn’t much else to say about The Kraken’s Tooth. It’s fun, easy, and you should definitely make the extra effort to check out the series. I really hope Subterranean eventually puts out a compilation book as I would be willing to stand on a street corner and hawk it. Don’t let a little leg work distract you from this excellent read.