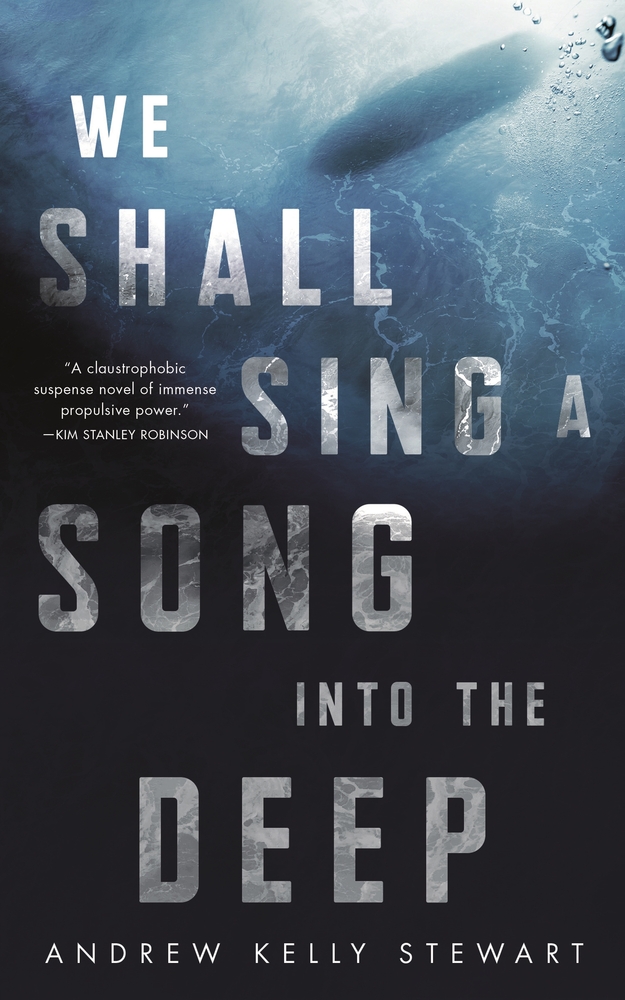 If there is something we always wish there was more of, it is the role of religion within science fiction stories. Neither of us is at all religious, but religion is nigh inescapable within the human experience. For it to just disappear, or not have a meaningful place within a world that is far beyond our own feels off sometimes. So how can we pass up a story that melds a nuclear apocalypse with religion? Due to a logistical error and someone (*cough* Brandee) misreading our calendar, Alex and Brandee teamed up to review the powerful forces at play in Andrew Kelly Stewart’s debut novella, We Shall Sing a Song Into The Deep.

A lone submarine called The Leviathan traverses the ocean with an all-male crew after a nuclear fallout has ravaged the land. The inhabitants–members of a religious order– pass the time in prayer while desperately trying to keep the deteriorating sub afloat. The world is slowly fading away, at least that is what the protagonist is made to believe. A young girl hiding among the crew, Remy knows little about life outside The Leviathan. However, secrets begin to unravel as her captain falls ill and entrusts Remy with the launch key to the world’s last nuclear missile. A new leader takes the helm and begins preparations for the Second Coming, with plans to launch the missile and deliver God’s Last Judgement. The crew’s days are numbered, and a hostage taken from the surface opens Remy’s eyes to the truth – it seems her Brothers have been keeping secrets of their own. Holding the world’s future in her hands, Remy must combat her beliefs and determine her true purpose.

We Shall Sing has a lyrical beginning that pulls you deep underneath the waves. It’s downright enchanting…at first. About halfway through the story, there is a defining shift in Stewart’s writing. The second half of the book loses its hushed, reverent approach and turns its turbines into overdrive to propel the now predictable plot forward. In terms of worldbuilding, we know little about the “Topside” world that exists on the surface. However, Stewart does a splendid job bringing you into Remy’s world on The Leviathan. The daily grind of the religious order is captured alongside mechanical details about the submarine, effortlessly easing you into their small, severe world. However, as the second half becomes more of a thriller, the descriptions and atmosphere take a backseat as exposition takes the forefront.

The characters follow a similar path to the atmosphere. Remy herself is easy to follow, as she seems wary even after several years amongst the crew. But she’s also instilled with purpose, much like the rest, but is questioning in the way a child insulated from the world would be when given an undue amount of responsibility. She is a delight in the first half but seems to very quickly acclimatize to the new situation halfway through, and it’s a little jarring. The side characters are recognizable archetypes but Stewart adds intimate details that really flesh them out, even if they don’t have much to do. They make the submarine feel like an enclosed ecosystem that has learned to make do with whatever resources it has.

This is a tough one for me because I was particularly excited to read this novella. Its premise was so unique within post-apocalyptic fiction. Stewart hooked me deep, luring me with his siren song as he sang about life on the ship. It felt enclosed, filled with purpose, and sailing slowly to its horrid task. Where the book fell apart for me was the halfway point, as the prose switches to a more standard action-oriented and dialogue-heavy affair. It’s abrupt and really pulled me out of the story. My least favorite thing about post-apocalypse stories is when it comes time to talk about the actual apocalypse, I just lose interest. The disaster never feels as interesting as the flow of life after the end. Stewart, for his part, imagines an interesting one, but it’s delivered in such a matter-of-fact manner, it’s impossible to question it from a reader’s viewpoint. I felt it should feel like the story Remy has been told all her life, but instead it just immediately reeks of fact, and Remy adapts to it incredibly quickly. It changes the rest of the book so that the two halves feel very different from each other. It should have felt like a revelation and instead, it just was. Stewart was able to make it feel tense towards the conclusion with a couple twists and turns here and there, but I wasn’t as engrossed.

The element that drew me in like the tide was Stewart’s integration of religion into the story. I was fascinated by the belief system the Brothers established and how it attached itself to the sub’s radioactive power. Religion created interesting dynamics, and I enjoyed seeing how the crew’s beliefs played out. The creative doctrine and cult-like ongoings are definitely the novella’s shining stars. The story itself is well-rounded overall, but it clearly reads like two separate pieces. The beginning was hypnotizing, but the shift quickly snaps you out of the story – eventually dampening the rest of the tale for me. I was ultimately satisfied after reading, yet wished that holy energy had permeated the story until the end.

We both agree that Stewart excelled in capturing an often ignored human experience in the aftermath of nuclear fallout. We Shall Sing A Song Into The Deep was a presentable, and often engaging, story despite its balancing act. If you can marry the story’s poetic beginning with its determined end, the novella accomplishes much.

Published by The Quill To Live

View all posts by The Quill To Live