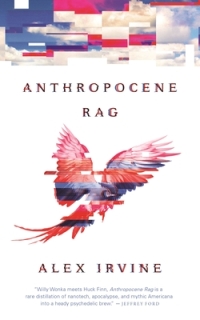 I am always on the lookout for stories about America, especially when it comes to speculative fiction. I find the myths about the United States, its formation, and expansion fascinating especially when they so often cover up many complicated and horrific histories. Its simplicity is enchanting to me and constantly begs deconstruction to find what the true “heart” of the American Story is. This is heightened during an election season, where talk of “what America is and should be” hangs heavy in the air. Add the third layer of COVID-19, and a lot of these questions and stories get brought into an even sharper focus when compared to the facts and histories. What the hell does that have to do with the book I am reviewing? Well Anthropocene Rag, by Alexander Irvine, is a clever, fun, engaging, and weird little book about a post-apocalyptic America that mostly succeeds in deconstructing how “we” talk about the story of America.

The book follows six main characters as they are visited by a construct named Prospector Ed, who gives them a golden ticket to enter the fabled Monument City. Each of the characters must travel to the Rocky Mountains across an America that is teeming with nano machines. A lot of the populace was killed and integrated into the machineries during an event called the Boom (the Boom is also used to refer to the machines collectively). The machines are everywhere, and depending on where you live, humans may or may not have a good relationship with the unpredictable Boom. In San Francisco, there is a relative harmony, as the machines inhabit human bodies. Other places are not so lucky, and people could be dismantled in seconds without even realizing it. But the Boom is doing something weird as all across the land, they are re-enacting the stories and folklore that make up the American Mythos.

Irvine’s writing is the first thing that truly hooked me about Anthropocene Rag. It feels like you’re sitting around a campfire with him as he recounts a past event. The characters come alive through his voice, making them feel both human and larger than life. The author also manages to make you as the reader complicit in the story through this stylization, asking you questions and sometimes making you feel as if you could stop it all at any moment. But you don’t, you want to know how it ends, you need to know how it ends. Fortunately, Irvine does not seem to judge you for this complicity, almost in some ways acknowledging that he too is at fault. It’s an incredibly engaging way to tell a story, and it calls attention to the story of America as well. Fortunately, Irvine succeeds in keeping the tone jovial, even as he is trying to get you to gaze into the abyss.

Irvine’s writing also helps the atmosphere within Anthropocene Rag. There is not a lot of plot, so Irvine relies very heavily on intimating feeling to great effect. The different regions that the characters begin their journey in, along with where they travel through, feel like you expect them to. I’m having a hard time explaining it, but Irvine nails the cultural osmosis of the different corners of America. Florida and New York City, feel like off versions of what we know of them today, as if something changed about them, but the bones are still there. There is a familiarity to them, as if Irvine wanted to reveal the core parts of them in a more thematic fashion. It was extremely haunting, and if that was Irvine’s goal, he succeeded. However, there is a slight tendency for some areas to feel “stereotypical” due to the fast nature of the book, but I also find it easy to overlook considering it is a lot more about the “feeling,” but I think some of it handily waved off in the deeper themes.

Among the myriad of themes, the one that obviously sticks out the most is “what is America?” It saturates every paragraph trying to fill the void between your eyes and the page. Irvine deftly explores this idea by using the campfire storytelling method I described above. Irvine gives no background to the disaster, just providing a name, the Boom, and the mystery around it. America as a concept barely exists within the text as the past is erased, forgotten. The only entities to remember it are the Boom themselves as they recreate and re-enact myths like Paul Bunyan and classic Mark Twain stories. Characters don’t know anything but their present lives and where they are headed. It feels as if Irvine is trying to mirror the creation of America by wiping away the past to create a new history, a new future, a new America. It feels especially clear when you compare it to the way conversations pass over the systematic extermination of Native Americans, “manifest destiny” and “American Exceptionalism.” Irvine does it right in front of the reader using stories you know, stories you feel something about. While you’re complicit he’s doing it without you, almost as if he’s taunting you. It’s eerie and beautiful and hits all the right notes for me.

There is so much more I’d love to dive into with this story, but we would be here forever. I had a good time with the characters, their little conversations as they traveled the wilds. I loved how Irvine was able to make the land feel so big and so very small and insignificant at the same time. I didn’t particularly enjoy one of the reveals, but I don’t think it hurt the story. I don’t think the book is for everyone though, as it is a little weird, and exists more in the realm of metaphor than the concrete. Some of the journeys may also fall a little flat if you aren’t steeped in American Folklore. However, I highly recommend it if you’re feeling adventurous and willing to consider the idea of “America” in these trying times.