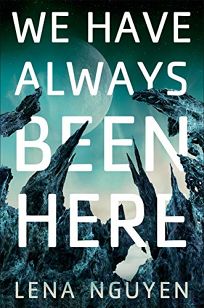 Unfortunately for you, the book I am about to review doesn’t come out for a couple weeks. But, I am so excited to talk about it that I had to make sure it didn’t fly under the radar. It’s one of our Dark Horse debuts of the second half of the year and you should definitely check it out. It’s a little treat from me to you! Luckily for both of us, this is not a trick, as I absolutely adored this book. Now it’s not often that science fiction and horror get thrown together, and it’s even rarer that it’s done in such an exciting fashion. We Have Always Been Here, by Lena Nguyen, is a science fiction horror that leans into its well established tropes, delivering a creepy and unsettling story that questions the nature of consciousness and agency.

We Have Always Been Here follows Grace Park, a ship psychologist who would rather deal with androids than humans. She is a temporary member of the Deucalion’s crew, a ship controlled by the ISF meant to explore and set up colonization efforts on designated planets. Her job is to make sure that the other specialists on board maintain their sanity, resolve interpersonal conflicts, and ease tensions between other crew members. However, something outside her training begins to happen to the crew. After several crew members start to exhibit odd behavior, such as sleepwalking and murmuring the terror of their dreams, the chief medical officer begins to place those with the madness into cryosleep as a form of quarantine. Since those who have been quarantined all suffered similar symptoms, there is concern it could be an alien virus, and the crew starts to worry. After Park’s supervisor is placed in cryo sleep too, Park desperately tries to get to the bottom of the mystery plague. With limited resources and no one to trust, will Park figure out what is happening before she too succumbs to the madness?

I’m just going to say this upfront, Nguyen absolutely knocks the horror aspects of this book out of the park. She does an incredible job of developing a thick atmosphere that permeates the book and ebbs and flows to suit the tension of the story. This feeling is suffused into almost every aspect, from the plot, to worldbuilding and even character development. Each revelation within the story only begs more questions, obscuring whatever bits of light the end of the tunnel may provide. Nguyen shows a real talent for introducing the characters and world in a piecemeal fashion that progressively feels more natural. It’s a little jarring at first because Nguyen does not hold your hand, choosing to jump right into the story without any background. Since the story is told through Park’s perspective, and she tells it as if she is talking to herself instead of the reader, it takes time for some of the language and lingo to build.

Now, I could dissect all of the usual individual pieces that make up the larger novel, but I think that would be doing Nguyen a disservice. While she shows incredible ability to write characters, build her world, provide misdirection, and spin an ever tightening plot, her power lies in interlinking all of these elements. The entire book is a delicate and intricate web of cause and effect, misdirection, and drip fed information. Her prose, while lush and heavy with description, makes the environment feel cramped and claustrophobic. This feeling is exacerbated by Park herself, as she is a calculating, insular and solitary person who tends to view interactions between people as an analytical puzzle to be solved. She shows no real attachment to the crew beyond her job. Her dwindling sanity adds to the already narrow perspective by rapidly shifting focus and viewing everything with an interrogating and defensive posture. Every piece feels fine tuned to fit exactly where it needs to be, leading to questionable answers, and unanswerable questions. We Have Always Been Here is a haunting puzzle where the pieces themselves start to shift in shape and color as you complete it.

Much like Park, the reader rarely gets a chance to rest. Nguyen dances between three different timelines and stories, holding the cards close to her chest. They perpetually feel ready to crash into each other only to swerve away at the last moment, leading to further questions about their meaning. Grace is the perfect vehicle for two of these timelines. Her misanthropic nature leads her to work out the complexities in her own mind, eschewing conversation for mental tunnel vision. The ISF itself isolates her from the rest of the crew for its own ends, a standard procedure one finds out, but questionable nonetheless. There are other ways Nguyen cleverly creates divisions, including class and point of origin, amongst the various crew members that feels natural to the world and brings out the individual personalities of the characters. And the ship itself, well, it feels perfectly endless, yet small enough to make an agoraphobe bang on the door to be let out.

Nguyen’s debut is impressive. The usual metaphors that litter the science fiction horror genre are flipped upside down and inside out, causing confusion for the reader and allowing the story to play out naturally. I can’t emphasize how astounded I was that each reveal only seemed to make things murkier while maintaining a sense of believability. If you’re looking for a psychological horror with a science fiction setting that never lets you go, We Have Always Been Here is a sure fire bet.

An ARC of this book was provided to us in exchange for an unbiased review. The thoughts on this story are my own.

View all posts by Alex Tas